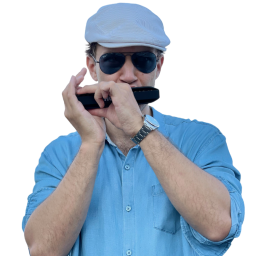 yvonnickprene.com
Reviews of “Jour de Fête” on SteepleChase Records :
“…Ballads and slower grooves are one of Prené’s strong points, but even when he embraces a fast tempo on “Obsessions” and John Coltrane’s “Satellite”, his harmonica playing has an ethereal quality…Jour de Fête is a consistently promising debut album from this young French improviser.”
The New York City Jazz Record-Alex Henderson“A first disc balanced repertoire of original compositions and well arranged pieces of Gillespie, Coltrane, Jerome Kern … it shows an astonishing ease … Nils Winther, creator of SteepleChase and discoverer of many young talents, did no wrong in inviting Yvonnick Prene to join his label. ”
Phillipe Vincent, “Revelation 2013” par Jazz Magazine (France)

“….we find a young phenom determine to take the harmonica to a new sense of melodic intensity, dynamic tension and improvisational techniques missing from the instrument on a consistent basis for years…Jour de Fête is a happy record, brimming with an effervescent quality that accentuates the sublime artistic gift of Prené…In short, Prené is the real deal….” Brent Black – CriticalJazz.com

“Jour De Fete is his recorded initiation into the fraternal order of jazz harmonica aces; he’s now a part of the club for life. Dan Bilawsky – All About Jazz

“…His music is mysterious in the rhythmic twists and turns that pursue the often magical melodies that they are comprised of. His sense of harmony is also quite accomplished and this is revealed in the light and dark colours that are made to mingle into the music…” Raul da Gama, Jazz da Gama

“Yvonnick Prene is an exceptional musician who is opening up a wealth of possibilities for his underrated but beautiful instrument. “Jour de Fête” is the perfect introduction for this young master of the harmonica.”
The Jazz Chill Corner